This is the second blog in the Leadership Spotlight series showcasing environmental groups across Canada and the support they receive or lack from political leaders. The series will present a wide spectrum of views that do not necessarily reflect the views of GreenPAC.

In 2015, GreenPAC volunteer Devika Shah posted a blog called Green is the New White, writing that too often the environmental movement represents only a narrow demographic. She leads us through her experience working with nature-loving, privileged, white Canadians, and how many of these leaders, while well-intentioned, don’t understand how to make the movement more inclusive.

Enter Alliance for a Just Toronto (AJT), a new group of climate activists working to prioritize communities of colour, working class communities, and communities that are disproportionately affected by climate change.

“I had originally been involved with other environmental groups, but they didn’t have the core values I wanted to see,” says Jody Chan, co-founder of AJT. “They weren’t prioritizing environmental justice and environmental racism, or Indigenous solidarity work, which is something we want to do at AJT.”

When we asked how political leaders can make climate solutions for communities facing marginalization, AJT pointed to TransformTO, Toronto’s climate action plan, as a guiding document.

“Ana Bailão, the councillor for Ward 18, her big thing is affordable housing and community housing, and our interest is climate justice. What connects it is TransformTO, because a big component of how Toronto is going to achieve its 80% emissions reduction is by funding retrofits to housing and older apartments,” says Cricket Cheng, a core member of AJT.

“Retrofitting will improve the conditions in which a lot of low-income folks live. So there’s a clear synergy, a clear common interest.” 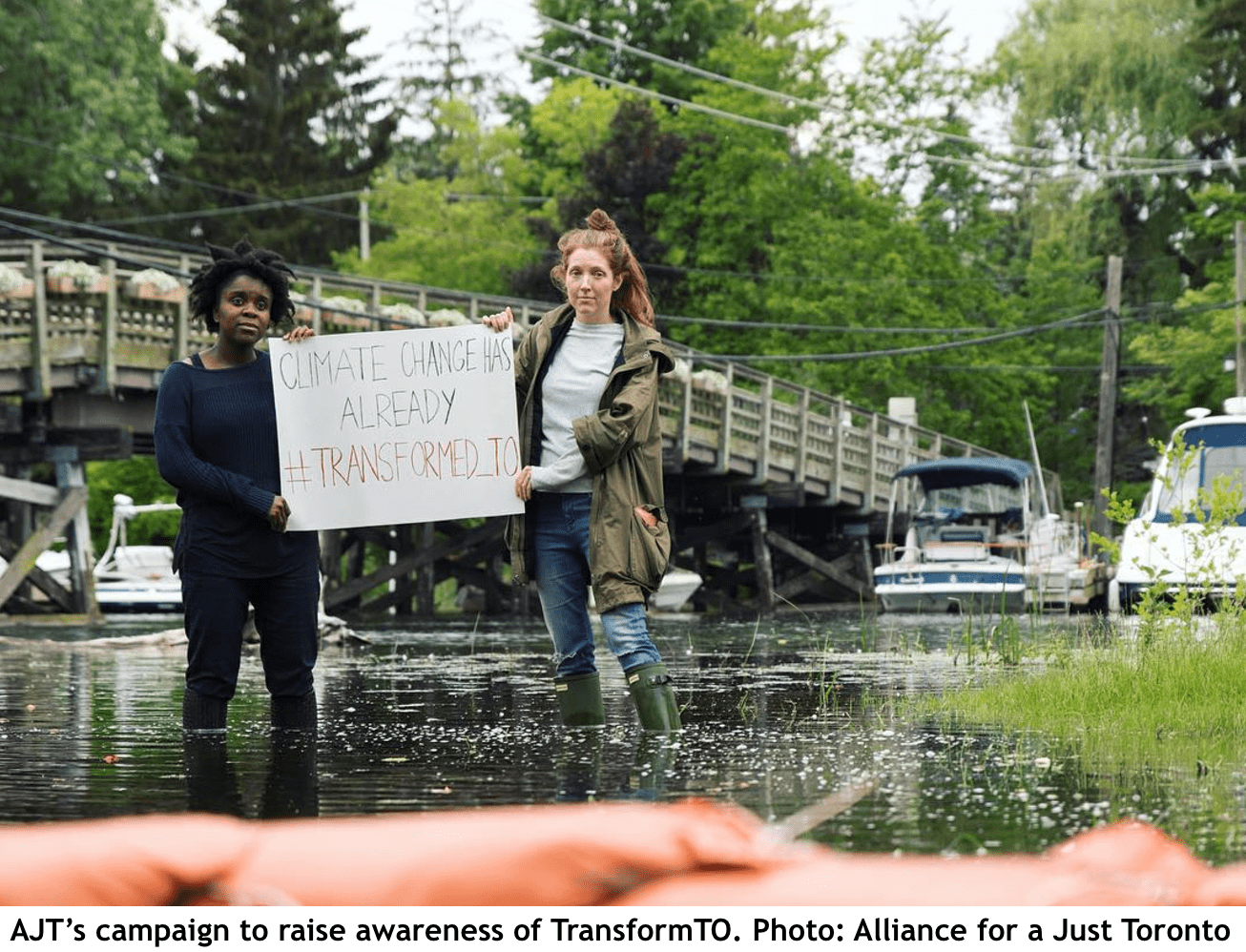 In fact, one of AJT’s major tactics in its discourse with city councillors is connecting climate change as a problem, and TransformTO as an important part of the solution, to issues that matter to councillors and their constituents.

“All of our meetings were about hammering that in. TransformTO doesn’t take away—there will be more funding for jobs, housing, transit. They aren’t mutually exclusive.”

From its launch in February 2017, AJT worked on getting councillors to endorse TransformTO. Members held phone banking parties, set up face-to-face meetings, and started a social media campaign to spread awareness.

After city council voted unanimously to move ahead with TransformTO in July, AJT got busy thinking of other ways to support climate action led by communities facing marginalization. “Front-line communities that have been dealing with environmental racism and other perils of marginalization are leaders in understanding and responding,” says Jody. “[We want to] develop meaningful relationships with, and follow the leadership of, these communities.”

Danielle Pal is a summer intern at GreenPAC. To get involved with AJT, come out to their weekly meetings every Thursday from 6:00 to 8:00 PM, on the 5th floor of the OISE building, 252 Bloor St. W. in Toronto. Are you doing environmental work, or planning an event and want their help building community power? Shoot them an email at alliance4justto@gmail.com.