This is the first blog in the Leadership Spotlight series showcasing environmental groups across Canada and the support they receive or lack from political leaders. The series will present a wide spectrum of views that do not necessarily reflect the views of GreenPAC.

“Urgency” is the word Jule Asterisk uses to describe why the Keepers of the Athabasca came to be 10 years ago.

Urgency to address the cumulative impacts of environmental disasters.

Urgency to gain perspectives from and protect those closest to the land, and those who derive sustenance from the land.

Urgency to address the constant challenge of existing toxic sites and the creation of new hazards.

Urgency to protect the community and give people a voice in combatting further health threats and environmental destruction.

Much of this urgency comes from the lack of scientific testing on the health and environmental impacts of hazardous waste sites. An example of this is in one of the Keepers’ current projects, challenging the approval of the Swan Hills Treatment Centre, a hazardous waste facility that specializes in PCB destruction.

“This facility site is at such a high location that it has an umbrella effect,” Jule explains. “If it was at level ground, the allowable emissions wouldn’t have such an effect, but since it’s on a hill, the wind currents can make the emissions travel further, which has never been tested.” 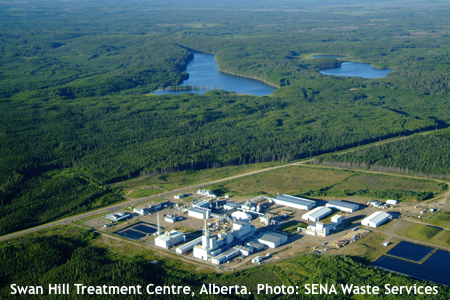 Jule says the Keepers have called for three additional sediment lake core samples, but the contractor running the facility for the Alberta government only wants to provide one. Local municipalities and First Nations are backing up the Keepers’ demand for more testing.

“The questions have now been asked, but the research hasn’t been done,” she says. “Avoidance isn’t helping people address their questions and concerns. So what if you’re afraid to hear the truth? It has to be told. We can’t move forward for our generation, and future generations, if we don’t know what is going on now.”

So what if you're afraid to hear the truth? It has to be told. We can't move forward if we don't know what is going on.

Jule points to the history of provincial leadership in Alberta as the main culprit for insufficient testing.

“I feel bad for the current government because it isn’t their fault. It was all put in place by the Alberta Conservatives and their 40-year dynasty that completely shut down any inquiries.” Jule says decades of industry and government collaboration have given way to deregulation of certain areas of waste treatment, and other areas covered by provincial approvals like bitumen and coal mining. There have been cover-ups and manipulation of data, and a lack of much-needed health and environmental studies.

So how do the Keepers push for environmental leadership in politics?

“Environmental leadership means looking at the environmental problems we’ve created—not trying to evade or avoid them, but actually looking at the issues and doing the research. We’re at this point in history where it is much easier for governments to fund independent research bodies, to allow credible and reliable research to come through and inform decision-making.”

Jule says it’s an “exciting time” because people and governments are finally paying attention to environmental issues. But citizens need to keep pushing—for research, accountability, and a safe environment for all.

Want to stay updated on the Keepers’ efforts? Check out their website and learn how you can get involved.

Jule Asterisk is the Executive Director for the Keepers of the Athabasca and lives in Slave Lake, Alberta. Danielle Pal is a summer student at GreenPAC.